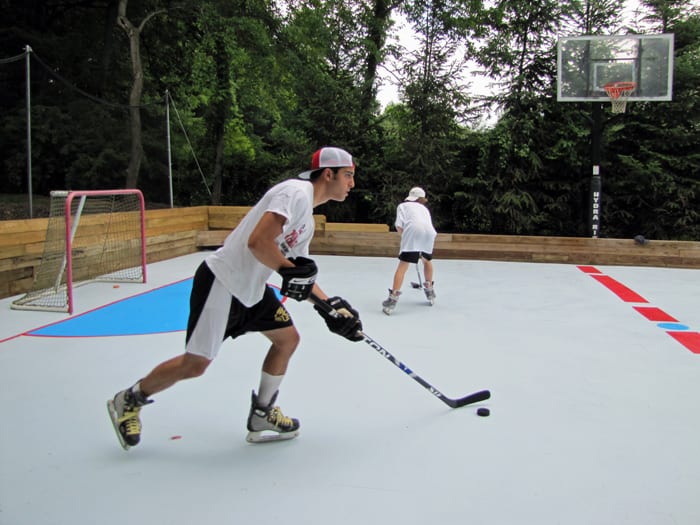 When you’re trying to figure out the best way to get your at-home hockey training rink set up, you’re probably at least a little concerned with the price of it. This can be an incredibly expensive project if you don’t do it right, but it could also be pretty affordable. It’s all a matter of knowing exactly what you’re doing and how to do it. So what’s going to be cheaper, synthetic ice or real ice? The title of this article may have spoiled the outcome for you, but we’re going to take a deep dive so you can fully understand.

We’re going to run both through a few criteria and find out which one is the cheaper hockey flooring among them. Today we’re going to be looking at:

By the time you’re done reading this article, you’ll understand how and why artificial ice is much more feasible for your budget for your at-home hockey training solution. No matter how much space you have or what state you’re in, artificial ice really does have some cost-saving features.

When you get started on this project, you’re going to have to pour a bit of money into it. It’s unfortunate but it’s true. The companies that make the parts for both an artificial ice rink and a real ice rink have to pay for their overhead and their employees have their own families to feed so they rely on the money from your purchase. That being said, there’s nothing wrong with shopping around to make sure that things fit into your budget. No one has unlimited resources.

Let’s start by looking at what you would need for a real ice skating rink just to get started. Firstly, you need a room that can facilitate this. If you don’t want any damage to your walls, you’d want a buffer zone. Whether you live in Alaska or Arizona, you’ll need this to be inside. Next, you’ll need good insulation for the room. Without that the cold will seep out through the walls and make the cooling expenses higher than they already will be, and they’re going to be exceptionally high if you want to keep the ice frozen.

Water freezes at 32 degrees Farenheight or 0 degrees celsius. Even if you live somewhere that has mild summers, it’s incredibly hard to cool a room down 30+ degrees Farenheight and keep it that cold. You can try using chemicals to chemically cool the water but the devices needed for that are prohibitively expensive on their own without having to keep the room cold enough to keep the ice from constantly melting. You’ll need a lot of machinery to keep it frozen no matter how you decide to go about freezing the ice, and you’ll also need to permanently alter and sacrifice a room to this. Once a room is made ready for an ice skating rink it’s hard to change it back without spending at least the same amount it cost upfront.

Artificial ice takes the cake on this one. You can set up your artificial ice skating rink inside or outside regardless of where you live because it won’t melt no matter how hot it gets. You won’t need to sacrifice an entire room to make it happen, you’ll just need to set it up in a space that works for you. Backyard, garage, basement, spare bedroom, it doesn’t matter.

Everything, no matter how simple, needs to be maintained unless you want it to break before its lifespan is over. Real ice skating rinks require a lot of maintenance because of the high level of machinery that is used to keep water frozen in the room that it’s in. Filter changes, cleaning, and possible chemical refills if you decided to chemically freeze the ice. These costs add up really quickly and a lot of maintenance needs to be done every couple of weeks, especially for any refrigeration that you’re using to keep the room nice and cold.

Artificial ice doesn’t have this problem and is actually mostly free to maintain. You just have to clean it from time to time, and you could really just use a broom and mop to get all of the debris and grime off of it. You could use some cleaning chemicals but honestly, you’d be good with some warm water and soap if you wanted to make sure that it was immaculate, and dish soap is incredibly affordable for any budget. You could even go down to your region’s version of the dollar store to get some dish soap, making artificial ice much cheaper to maintain.

Now, no matter how well you maintain things, things break sometimes. If you own a car or anything else that has complex machinery in it you know just how true this can be. Repairing and replacing things can be incredibly expensive, but it can also be relatively cheap depending on what you’re looking at. So what’s going to be cheaper for repairs and replacements, artificial ice or real ice? The answer might come as a surprise to you, but the cheaper thing to repair here is actually a real ice skating rink.

Just kidding, a real ice skating rink is very expensive to repair. Have you ever had to call an appliance repair person to your house to fix something? It’s not cheap. Now, imagine having to call that same appliance repair person to repair the complex system that you have set up to keep your ice skating rink cool. Odds are they wouldn’t know what they were doing so you’d need to call an HVAC technician or maybe even someone from the company that manufactured the equipment in order to get things back in working order.

On top of having to pay the technician for their time, you’ll need to pay for parts. Depending on how obscure the machines you went with are, this could be incredibly expensive. Even the most common parts for this kind of setup cost a lot of money because the market isn’t very big. The only other people that are really buying this kind of machinery are either those that are filthy rich and don’t care how much it costs or businesses like ice skating rinks that allow people to pay them to skate on their ice, making it more of a monetary investment than a training investment.

Artificial ice rinks are made up of interlocking tiles that are designed to be able to withstand a lot of pressure. There’s no machinery involved in an artificial ice skating rink and the tiles are very unlikely to break. That being said, they can still break if the wrong sequence of events takes place. Well, because the tiles are modular you don’t need to replace the entire rink to fix that. You could either contact the manufacturer to order a new single tile and put it in where the broken one went or buy a whole new pack that way you have extras on hand.

Overall Costs: Who is the Big Winner?

We’ve looked at all of the categories of cost, at every place that you’d need to spend money. There is one thing that we didn’t look at and that’s the fact that artificial ice wears down ice skates twice as fast as real ice, which means that you would need to spend more time sharpening your blades or spend more money at the blade sharpener’s shop. That cost is almost inconsequential in comparison to how much a real ice skating rink would cost, but if we are to be thorough it’s important to mention that.

That being said, artificial ice is the cheaper option in every category other than ice skate costs. It costs thousands of dollars more to get a real ice skating rink set up and maintained in your home, making it entirely unaffordable to most people. If you’re filthy rich and have the resources to blow it could be a good option, but for the rest of us, it’s better to stick with artificial ice. Either way, your friends and neighbors will still be impressed by the ice skating rink at your home.

Choosing the Option That’s Best For Your Budget

These kinds of home improvement projects can be incredibly expensive. Whether you’re looking to add an extra room, remodel the kitchen, or just add an ice skating rink so you and your family can ice skate whenever you want. It’s good to be aware of your budget so you don’t put yourself into too much debt. Fortunately, when you’re building your at-home ice skating rink, you can always go with an artificial ice skating rink and not force yourself to take out a second mortgage on your home in order to finance it.